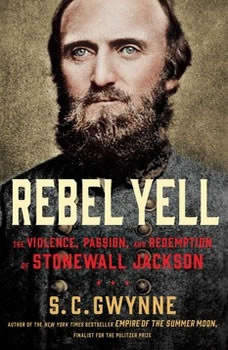 Rebel Yell: The Violence, Passion and Redemption of Stonewall Jackson

From the author of the mega-bestselling, prize-winning New York Times bestseller Empire of the Summer Moon comes a groundbreaking account of how Civil War general Thomas “Stonewall” Jackson became a great and tragic American hero.General Stonewall Jackson was like no one anyone had ever seen. In April of 1862 he was merely another Confederate general with only a single battle credential in an army fighting in what seemed to be a losing cause. By middle June he had engineered perhaps the greatest military campaign in American history and was one of the most famous men in the Western World. He had given the Confederate cause what it had recently lacked: hope. In four full-scale battles and six major skirmishes in Virginia’s Shenandoah Valley, Jackson had taken an army that never numbered more than 17,000 men and often had far less, against more than 70,000 Union troops whose generals had been ordered specifically to destroy him. And he had humiliated them, in spite of their best efforts, sent the armies reeling backward in retreat. He had done it with the full knowledge that he and his army were alone in a Union-dominated wilderness and surrounded at all times. He had even beaten a trap designed by Lincoln himself to catch him. How did he do this? Jackson marched his men at a pace unknown to soldiers of the era. He made flashing strikes in unexpected places, and assaults of hard and relentless fury. He struck from behind mountain ranges and out of steep passes. His use of terrain reminded observers of Hannibal and Napoleon. His exploits in the valley rank among the most spectacular military achievements of the 19th century. Considered one of our country’s greatest military figures, a difficult genius cited as inspiration by such later figures as George Patton and Erwin Rommel, and a man whose brilliance at the art of war transcends the Civil War itself, Stonewall Jackson’s legacy is both great and tragic in this compelling account, which demonstrates how, as much as any Confederate figure, Jackson embodies the romantic Southern notion of the virtuous lost cause.