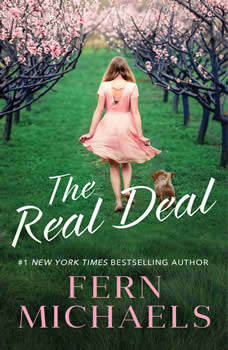 A contemporary romantic novel set in Washington, D.C., THE REAL DEAL tells the story of Quinn Star, a young woman who has worked as an F.B.I. agent for six years. Tired of the old boy mentality there, she quits her job and pursues her dream of being a Secret Service agent. With impressive F.B.I. credentials and a recommendation from her aunt who is an old friend of the First Lady, Quinn lands a job at the White House guarding the President. But all appears not to be well there. The President is kept away from the public and from his own wife by a small group of Presidential advisors. Quinn discovers that her former boss at the F.B.I., Ezra "Puff" Lapufsky with whom she had a brief volatile romance, is keeping her under surveillance. What's going on? Quinn soon discovers that Puff suspects the President is suffering from Alzheimer's disease and a cabal of ruthless advisors is keeping this a secret in order to commandeer the Executive Branch for their nefarious purposes. With help from Puff, her aunt and the First Lady, Quinn flushes out the villains, safeguards the life of the President, saves her country and finds love and happiness with her former boss.