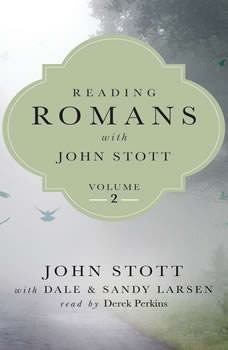 Paul's letter to the Romans has for two thousand years been a touchstone for all who want to understand the power of the gospel and the righteousness of God revealed from heaven. The truth in Romans transforms our thinking and convicts our hearts as we discover the power of the gospel for every area of our life and our world. In this volume, the second half of John Stott's The Message of Romans is condensed into brief readings suitable for daily use which take us passage by passage through the Scripture text. Including ten weekly studies for individuals or groups, this book covering Romans 9?16 allows readers to enjoy the riches of Stott's writings in a new, easy-to-use format. The remainder of Romans is presented in the companion to this volume. John Stott was one of the most beloved and masterful Bible teachers of the last fifty years. His books have sold in the millions. Christians on every continent have heard and read his instructive and inspiring expositions of Scripture. The books in the Reading the Bible with John Stott series condense the essential message of Stott’s teaching, largely drawn from his Bible Speaks Today volumes, and present it in a format suitable for daily reading. Questions at the end of each section make these books even more useful for individuals or groups.

A Survey of the New Testament: Audio Lectures
by Robert H. Gundry

These audio lectures are a unique learning experience. Unlike a traditional audiobook’s direct narration of a book’s text, A Survey of the New Testament: Audio Lectures includes high quality live-recordings of college-level lectures that...

The Lord is my shepherd. Thus begins the most beloved of all Psalmsand thus begins a thousand-year journey through the Bible. Prophets, apostles, and Jesus himself took up this image from David, reshaping it, developing it, and applying it to their...

The New Testament tells the extraordinary and moving story of the life of Christ and the founding of his Church. This generous selection from the texts which lie at the root of two thousand years of European civilization ranges between the powerful ...

The Doctrine of Revelation
by Arthur W. Pink

The present generation has, for the most part, been reared not only in an atmosphere of negative unbelief but of hostile unbelief. They live in a world where materialism and skepticism are rampant and dominant. In the great majority of homes the Sun...

Discover the Biblical truth about the controversial gift of speaking in tongues! Have you ever been told that speaking in tongues is "not for today?" Maybe you've heard people speak in tongues...and it seemed weird. You thought to yourself, "This is...

The one book of the Bible which best unites the Old Testament with the New is the Epistle to the Hebrews. Produced in Apostolic circles, doubtless by a companion of St. Paul, it remains the best account in all of divine revelation as to how the hist...

Paul's letter to the Romans has for two thousand years been a touchstone for all who want to understand the power of the gospel and the righteousness of God revealed from heaven. The truth in Romans transforms our thinking and convicts our heart...

A Better Freedom
by Michael Card

When Michael Card first started attending an African American church, he was struck by how the congregation worshiped Jesus as "Master." He soon learned that during slavery, calling Jesus "Master" was a subtle way of saying that their earthly master...

Reading the Sermon on the Mount wit...
Reading the Bible with John Stott