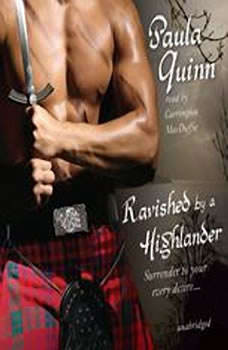 Ravished by a Highlander: The Children of the Mist Series, Book 1

Davina Montgomery is no ordinary English lady. For her own protection, shes been locked away from society, her true identity the Crowns most closely guarded secret. Until a shocking betrayaland a bold rescueland her in the arms of a fierce Highlander, a powerful warrior whose searing gaze and tantalizing touch awaken her body and soul.

As the firstborn son of a powerful Scottish laird, Robert MacGregor has no loyalty to the English throne, but hes not the kind of man to leave a woman in distress, even if she is English. He vows to deliver Davina to safety, unharmed and untouched. Yet one stolen kiss leaves them both smoldering with desire and desperate for more. With Davinas secret threatening to destroy his clan, Rob must choose between everything he holds dear and the one woman he cant live without.

Claimed by the Highlander
by Julianne MacLean

With his tawny mane, battle-hewn brawn, and ferocious roar, Angus "The Lion" MacDonald is the most fearsome warrior Lady Gwendolen has ever seen—and she is his most glorious conquest. Captured in a surprise attack on her father's castle, Gwend...

Passion for the Game
by Sylvia Day

Infamous for satisfying his limitless wants and desires, Christopher is a free man again. And this time he’s on a mission to engage, deceive and seduce the one woman as ruthless as he is when it comes to dangerous games of passion.…Far f...

The Stranger I Married
by Sylvia Day

Gray was beautiful four years ago, when he asked Isabel to marry him. Now there are no words to describe him. He is no longer young and reckless, not by any stretch of the imagination, but a tormented man, driven by secrets, silent about what heR...