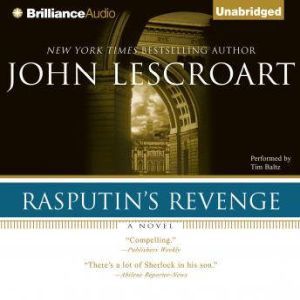 In Son of Holmes, John Lescroart introduced Auguste Lupa, reputed son of the greatest detective of all time... and possessor of a brilliant deductive mind in his own right. Now, in Rasputin’s Revenge, Lupa is summoned to the court of the Russian Czar — where, with a bit of unexpected assistance from none other than Holmes and Watson, he untangles a chilling plot that holds the Winter Palace in a lethal grip.... Praise for Son of Holmes and John Lescroart “A riveting thriller.” —Booklist “Detective fans will lap up the details of Lupa’s [Holmesian] heritage.” —Publishers Weekly “Raymond Chandler once wrote that the test of a first-rate murder mystery is whether you would keep reading it if the last chapter — and the revelation of whodunit — were missing. In the matter of John Lescroart, I would keep reading any of his books, even without that last chapter.” —Fort Worth Star-Telegram “Amusing and intriguing.” —Los Angeles Herald-Examiner