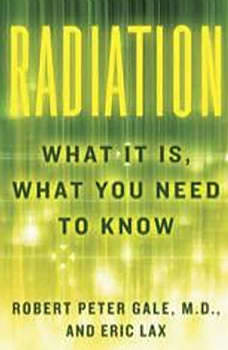 Radiation: What It Is, What You Need to Know

The essential guide to radiation: the good, the bad, and the utterly fascinating, explained with unprecedented clarity.

Earth, born in a nuclear explosion, is a radioactive planet; without radiation, life would not exist. And while radiation can be dangerous, it is also deeply misunderstood and often mistakenly feared. Now Robert Peter Gale, M.D,—the doctor to whom concerned governments turned in the wake of the Chernobyl and Fukushima disasters—in collaboration with medical writer Eric Lax draws on an exceptional depth of knowledge to correct myths and establish facts.

Exploring what have become trigger words for anxiety—nuclear energy and nuclear weapons, uranium, plutonium, iodine-131, mammogram, X-ray, CT scan, threats to the food chain—the authors demystify the science and dangers of radiation, and examine its myriad benefits, from safely sterilizing our food to the relatively low-risk fuel alternative of nuclear energy. This is the book for all readers who have asked themselves questions such as: What kinds of radiation, and what degree of exposure, cause cancer? What aftereffects have nuclear accidents and bombs had? Does radiation increase the likelihood of birth defects? And how does radiation work?

Hugely illuminating, Radiation is the definitive road map to our post-Chernobyl, post-Fukushima world.

Bonus: Includes a PDF of Illustrations.