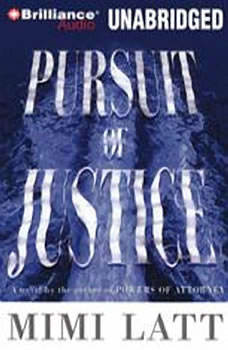 Rebecca Morland had a rosy future. She and her husband, Ryan, were making plans to start a family; he was a partner at a prestigious LA law firm; and her own work, at a city legal clinic, was very satisfying. Then one night at a party, on a yacht owned by a wealthy and politically ambitious businessman, Ryan vanishes. And Rebecca's life is turned irrevocably upside down. Ryan's colleagues say he had seemed depressed, that he had been drinking the night he disappeared. Funds have been embezzled from the firm, and a suicide note is found. The police are all too happy to close the case. Rebecca sets out to find out what really happened to her husband, but uncovers things that both surprise and terrify her. And she soon realizes that the same forces that took Ryan's life are intent on silencing her was well.