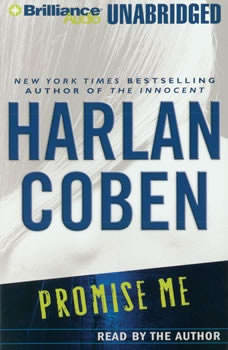 It has been six years since entertainment agent Myron Bolitar last played superhero. In six years he hasn’t thrown a punch. He hasn’t held, much less fired, a gun. He hasn’t called his friend Win, still the scariest man he knows, to back him up or get him out of trouble. All that is about to change . . . because of a promise. The school year is almost over. Anxious families await word of college acceptances. In these last pressure-cooker months of high school, some kids will make the all-too-common and all-too-dangerous mistake of drinking and driving. But Myron is determined to help keep his friends’ children safe, so he makes two neighborhood girls promise him: If they are ever in a bind but are afraid to call their parents, they must call him. Several nights later, the call comes at 2:00 am, and true to his word, Myron picks up one of the girls in midtown Manhattan and drives her to a quiet cul-de-sac in New Jersey where she says her friend lives. The next day, the girl’s parents discover that their daughter is missing. And that Myron was the last person to see her. Desperate to fulfill a well-intentioned promise turned nightmarishly wrong, Myron races to find her before she’s gone forever. But his past will not be buried so easily - for trouble has always stalked him, and his loved ones often suffer. Now Myron must decide once and for all who he is and what he will stand up for if he is to have any hope of saving a young girl’s life. “Harlan Coben is the modern master of the hook-and-twist - luring you in on the first page, only to shock you on the last.” - Dan Brown, author of The Da Vinci Code