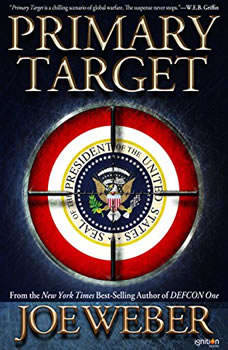 "Primary Target is a chilling scenario of global warfare. The suspense never stops."—W.E.B. Griffin “Weber weaves a frighteningly real story of international terrorism in America in his newest thriller.”—Publishers Weekly As the once-powerful Soviet Union descends into social and economic collapse, a group of hard-line communists has devised a strategy to return their country to its former glory. In league with the most ruthless militant extremists of the Middle East, they hatch a plot to eliminate the one person with the power to stop them:  the President of the United States. This time, America isn’t declaring a war against terrorism. The terrorists are declaring war on America . . . “Weber colors his novel with numerous subplots, well-developed characters and historical references to Operation Desert Storm and the Iranian hostage crisis. His knowledge of weapons, military aircraft and terrorist tactics is superior, and a surprise ending teases readers with the tempting possibility . . .”—Publishers Weekly “Some writers get better with age: Weber is among them.”—Library Journal