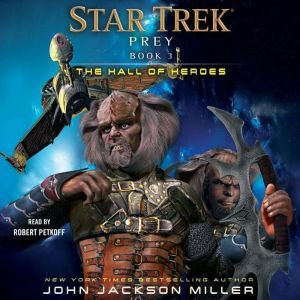 Continuing the milestone 50th anniversary celebration of Star Trek—an epic new trilogy that stretches from the events of The Original Series movie The Search for Spock to The Next Generation!The Klingon Empire stands on the precipice. In the wake of violence from the cult known as the Unsung, paranoia threatens to break Chancellor Martok’s regime. Klingons increasingly call for a stronger hand to take control...one that Lord Korgh, master manipulator, is only too willing to offer. But other forces are now in motion. Assisted by a wily agent, the Empire’s enemies secretly conspire to take full advantage of the situation. Aboard the USS Titan, Admiral William T. Riker realizes far more than the Federation’s alliance with the Klingons is in danger. With the Empire a wounded animal, it could either become an attacker—or a target. Yet even as hostilities increase, Commander Worf returns to the USS Enterprise and Captain Jean-Luc Picard with a daring plan of his own. The preservation of both the Empire and the Federation alliance may hinge on an improbable savior leading a most unlikely force....