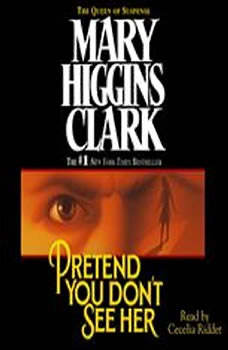 Pretend You Don't See Her

What happens when a young woman is accidentally caught up in a dangerous murder investigation, having merely been in the wrong place at the wrong time? What happens when she is placed under protective care, forced to give up her identity and move to another part of the country, at least until the killer can be firmly identified and apprehended? What happens when in her new life she meets and falls in love with the perfect man, only she can't marry him because she can't tell anyone -- even him, especially him -- who she really is? Pretend You Don't See Her is the story of Lacey Farrell, a rising star on Manhattan's high-powered real estate scene. Lacey becomes the witness to a murder and bears the dying words of the victim, a woman who is convinced that her attacker was after a diary her daughter had kept up until the day she supposedly took her own life. Lacey gives the diary to the police -- but not before she makes a copy for herself. Obliged to give up her family, her job, her very identity, Lacey is placed in the Witness Protection Program. She must assume a new life, at least until the killer can be found and brought to trial...But she soon realizes that her sanctuary is not safe. Lacey is caught in a race against time as she tries to uncover what happened before she is killed herself...