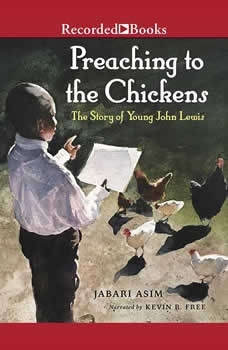 Preaching to the Chickens: The Story of Young John Lewis

Critically acclaimed author Jabari Asim and Caldecott Honor-winning illustrator E. B. Lewis team up to give readers a fascinating glimpse into the boyhood of Civil Rights leader John Lewis. Even as a very young boy, John Lewis knew he wanted to be a preacher when he grew up. He wanted to be the kind of leader who could use his passionate speeches to stir hearts to change, minds to think, and bodies to take action. But why wait to grow up? At five years old, when he became the official caretaker of the sixty chickens on his family's farm, he realized he had a wonderful audience to practice on-and they became this brave Civil Rights activist's first flock, content under his watchful care and riveted by the power of his words.

Who Was Gandhi?
by Dana Meachen Rau

Mohandas Karamchand Gandhi was born in 1869 in British-occupied India. Though he studied law in London and spent his early adulthood in South Africa, he remained devoted to his homeland and spent the later part of his life working to make India an i...

What was it like growing up as a son of Dr. Martin Luther King, Jr.? This memoir by Martin Luther King III provides insight into one of history’s most fascinating families and into a special bond between father and son.“I have a dream t...

The true story of an all-American girl and a boy from an impoverished city in Zimbabwe and the letter that changed both of their lives forever.It started as an assignment. Everyone in Caitlin's class wrote to an unknown student somewhere in a dista...

Who Was Frederick Douglass?
by April Jones Prince

Born into slavery in Maryland in 1818, Frederick Douglass was determined to gain freedom--and once he realized that knowledge was power, he secretly learned to read and write to give himself an advantage. After escaping to the North in 1838, as a fr...

As a child he dreamt of changing South Africa; as a man he changed the world.  Nelson Mandela spent his life battling apartheid and championing a peaceful revolution.  He spent twenty-seven years in prison and emerged as the inspiring lead...

A perfect tool for young readers as they grow into the leaders of tomorrow, Veronica Chambers’s inspiring collection of profiles—along with Senator Cory Booker’s stirring foreword—will inspire readers of all ages to stand up...

Ashley Rhodes-Courter spent nine years of her life in fourteen different foster homes. As her mother spirals out of control, Ashley is left clinging to an unpredictable, dissolving relationship, all the while getting pulled deeper and deeper into th...