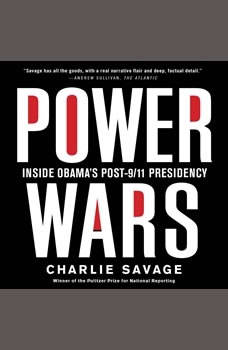 Pulitzer Prize-winning journalist Charlie Savage's penetrating investigation of the Obama presidency and the national security stateBarack Obama campaigned on changing George W. Bush's "global war on terror" but ended up entrenching extraordinary executive powers, from warrantless surveillance and indefinite detention to military commissions and targeted killings. Then Obama found himself bequeathing those authorities to Donald Trump. How did the United States get here?In Power Wars, Charlie Savage reveals high-level national security legal and policy deliberations in a way no one has done before. He tells inside stories of how Obama came to order the drone killing of an American citizen, preside over an unprecendented crackdown on leaks, and keep a then-secret program that logged every American's phone calls. Encompassing the first comprehensive history of NSA surveillance over the past forty years as well as new information about the Osama bin Laden raid, Power Wars equips readers to understand the legacy of Bush's and Obama's post-9/11 presidencies in the Trump era.