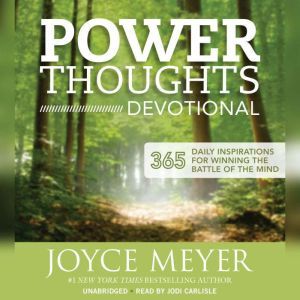 Power Thoughts Devotional: 365 Daily Inspirations for Winning the Battle of the Mind

Based on Joyce Meyer's New York Times bestseller Power Thoughts, this devotional includes 365 opportunities to tap into God's power in your daily life by thinking and speaking His way. The POWER THOUGHTS DEVOTIONAL will provide you with life-changing declarations of truth, directly from God's Word, to think and speak over your life every day of the year. Proverbs 18:21 says, "Death and life are in the power of the tongue." Simply put, words are containers for power--positive or negative, creative or destructive. Therefore, it is imperative that you learn to think and speak on purpose, using the life-giving wisdom in God's Word. When you do, your life will never be the same! If you struggle with being negative, critical, or judgmental of people and situations, don't be discouraged. God wants to help you renew your mind to think and speak as He would. It won't happen overnight--but each day you will make progress as you choose power thoughts to be more like Jesus. It's time for you to experience and enjoy the life God created you to live, and Joyce wants to help you get there. You can do it with this devotional by learning how to think and speak power thoughts daily.