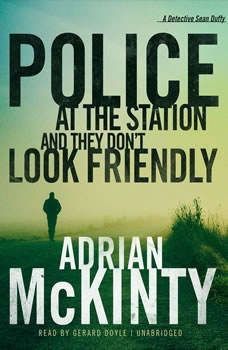 Police at the Station and They Dont Look Friendly: A Detective Sean Duffy Novel

Another thrilling mystery featuring Detective Sean Duffy and his most dangerous investigation yet Belfast, 1988. A man is found dead, killed with a bolt from a crossbow in front of his house. This is no hunting accident. But uncovering who is responsible for the murder will take Detective Sean Duffy down his most dangerous road yet, a road that leads to a lonely clearing on a high bog where three masked gunmen will force Duffy to dig his own grave. Hunted by forces unknown, threatened by Internal Affairs, and with his relationship on the rocks, Duffy will need all his wits to get out of this investigation in one piece.