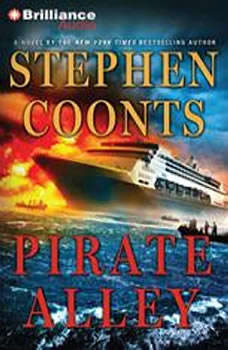 Grafton and Carmellini are back, battling terrorists on the high seas alongside a top-notch team of Navy SEALs in an action-packed tale by New York Times bestselling author Stephen Coonts.A luxurious vacation cruise to the exotic locales of the Red Sea and the Gulf of Aden turns into a nightmare for passengers and crew when their ship is suddenly attacked and captured by a band of bloodthirsty Somali pirates. An initial rescue mission ends in failure, and the decks are covered in blood. Unless they are paid a ransom of $200 million within seven days, the pirates threaten to execute all their hostages. But information gleaned from a captured Al Qaeda operative indicates that there is a far more dangerous conspiracy afoot.Once the ransom is paid, Islamic militants intend to swoop in and slaughter the passengers in an orgy of terror, hoping to provoke a massive American military response that will set the Muslim world aflame. Jake Grafton is assigned to negotiate with the brutal pirate chief while his right-hand man, Tommy Carmellini, and a team of CIA and Navy SEAL operatives mount an undercover operation to save the hostages and keep the United States from being maneuvered into a murderous war.