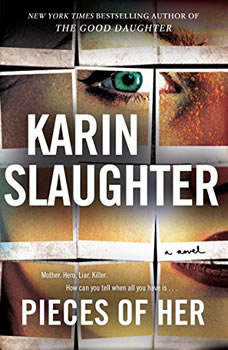 The #1 internationally bestselling author returns with an electrifying novel of devastating secrets and hidden lives that probes the fraught relationship between daughters and mothers and the lengths we go to protect those we love.What if the person you thought you knew best turns out to be someone you never knew at all?Andrea Cooper knows everything about her mother, Laura. She knows Laura has spent nearly her whole life in the small beachside town of Belle Isle, Georgia; she knows Lauras never wanted anything more than to lead a quiet, normal life in this conventional community; she knows Lauras a kind and beloved speech pathologist who helps others; she knows Lauras never kept a secret in her life. Andrea knows that Laura is everything she isntconfident, settled, sure of herself. Feeling listless, with no direction, Andrea, unlike Laura, struggles to find her way.But Andreas certainty is upended when a visit to the mall is shattered by an act of horrifying violence that reveals a completely different side of Lauraa cool woman who calmly faces down a murderer. It turns out that before Andreas mother was Laura, she was someone completely different. For nearly thirty years shes been hiding from the woman she once was, lying low in the hope that no one would ever find her. But now shes been exposed, and nothing will ever be the same again.The assailant was a mentally troubled, teenaged scion of Georgia law enforcement royalty, and now the police want answers about what really happened in those terrifying moments at the mall. Though shes being scrutinized at every level of the criminal justice system and her innocence is on the line, Laura refuses to speak to anyone, including her own daughter. She pushes Andrea away, insisting its time for her to stand alone and make a life for herself.To save her mother, Andrea embarks on a desperate journey following the breadcrumb trail of her mothers past. Andrea knows that if she cant uncover the secrets hidden there, there may be no future for her mother or her.Filled with intriguing turns, surprising revelations, and a compelling cast of characters, Pieces of Her is Slaughters most electrifying, provocative, and suspenseful novel yet. A BookRiot Pickof Upcoming Mystery Releases. A Bookish Pickof Must-Reads for Summer.