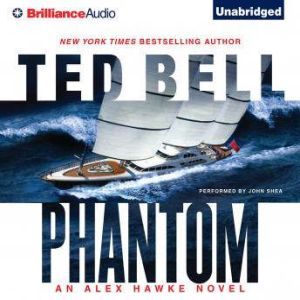 The first and most bizarre event nearly becomes a monumental catastrophe when something goes awry at an American theme park, wreaking havoc on visitors looking for nothing more than a sun-splashed holiday. In a different part of the country, a USAF F-15 pilot, escorting another jet in the skies over the Midwest, inexplicably loses control of his plane, endangering the lives of several people and deeply puzzling those following his mission on the ground. Then, in the misty calm of a coastal California evening, the world’s premier scientist on the subject of artificial intelligence gets a strange phone call. When he hangs up, he quietly grabs his coat and leaves for an after-dinner stroll from which he never returns. It’s up to Hawke and the brilliant former inspector Ambrose Congreve to find out what could possibly be happening. But how does one identify—and fight—an enemy one can’t see, a real phantom? Even these seasoned operatives are mystified. Is there really such a thing as an ultra-intelligent machine, a cyberweapon that can shift the geopolitical balance of power? In a hunt that takes him from Palo Alto, California, to the Russian frontier, to Cambridge University and the glistening Mediterranean aboard his newly christened and armed super-yacht Blackhawke, Alex Hawke is joined by the unstoppable Stokely Jones and his ex-CIA buddy Harry Brock as he moves closer to unmasking the scientist behind these extraordinary events, going nose-to-nose with an enemy unlike any he’s fought before—and may never again. “A hero to rival Bond by an author to rival Cussler.” — The Bookseller (U.K.)