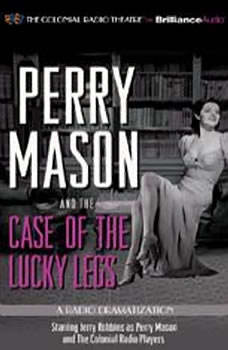 Perry Mason and the Case of the Lucky Legs: A Radio Dramatization

Criminal lawyer and all-time #1 mystery author Erle Stanley Gardner wrote close to 150 novels that have sold 300 million copies worldwide. His most popular books starred the incomparable attorney-sleuth Perry Mason. The Case of the Lucky Legs is the story of a confident man who promoted fake beauty pageants in small California towns. Marjorie Clune was one of his winning victims, "The Girl with the Lucky Legs." She was promised a Hollywood movie contract, but the scam artist fled with the money. Marjorie fled too, left her hometown in shame to try and “prove” herself in Hollywood. Perry Mason is hired to track her down, but when the deceitful pageant promoter turns up murdered, Marjorie becomes the prime suspect in this “edge of your seat” murder mystery.

The Case of the Velvet Claws
Perry Mason Series #1

The Case of the Sulky Girl
Perry Mason Series #2