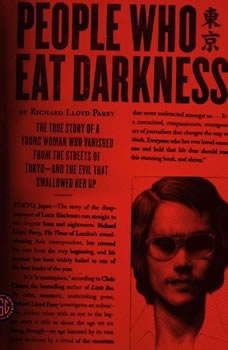 People Who Eat Darkness: The True Story of a Young Woman Who Vanished from the Streets of Tokyo—and the Evil That Swallowed Her Up

Lucie Blackman-tall, blond, twenty-one years old-stepped out into the vastness of Tokyo in the summer of 2000 and disappeared. The following winter, her dismembered remains were found buried in a seaside cave. The seven months in between had seen a massive search for the missing girl involving Japanese policemen, British private detectives, and Lucie's desperate but bitterly divided parents. Had Lucie been abducted by a religious cult or snatched by human traffickers? Who was the mysterious man she had gone to meet? And what did her work as a hostess in the notorious Roppongi district of Tokyo really involve? Richard Lloyd Parry, an award-winning foreign correspondent, followed the case from the beginning. Over the course of a decade, as the rest of the world forgot but the trial dragged on, he traveled to four continents to interview those connected with the story, assiduously followed the court proceedings, and won unique access to the Japanese detectives who investigated the case. Ultimately he earned the respect of the victim's family and delved deep into the mind and background of the man accused of the crime-Joji Obara, described by the judge as "unprecedented and extremely evil." The result is a book at once thrilling and revelatory. A New York Times bestseller. A 2012 Publishers Weekly Top 10 Book for Nonfiction. A New York Times Editor's Choice. A 2012 Slate Magazine Best Book: Staff Pick. A 2012 Time Magazine Top 10 Book for Nonfiction. A 2012 Entertainment Weekly Best Book for Nonfiction. A 2012 Kansas City Star Top 100 Book for Nonfiction. An Amazon Top 100 Book of 2012. New York Times Book Review 100 Notable Books for Nonfiction, 2012. A 2013 Edgar Allan Poe Award Nominee for Best Fact Crime. BuzzFeed Books Pick. A BookRiot Pick of 50 of the Best Thriller Audiobooks. A BookPage Top Pick of True Crime Books.