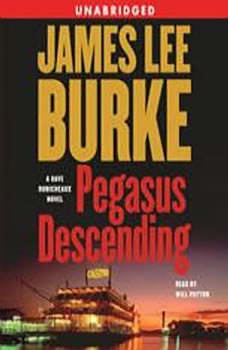 A troubled young woman breezes into Detective Robicheaux's hometown of New Iberia, Louisiana. She happens to be the daughter of his friend -- a friend he witnessed gunned down in a bank robbery, a tragedy that forever changed Robicheaux's life. The twists begin when Trish Klein -- the only offspring of Robicheaux's Vietnam-era buddy -- starts passing marked hundred-dollar bills in local casinos. Is she a good kid gone bad? A victim's child seeking revenge? A promiscuous beauty seducing everyone good within her grasp? And can Robicheaux make peace with his friend's murder in time to figure out how a local mobster fits into all the schemes and death? Will his life be whole again when it has been shattered by so much tragedy? In Pegasus Descending, James Lee Burke explores psyches as much as evidence, and tries to make sense of human behavior as well as of his characters' crimes. Richly atmospheric, frightening in its sudden violence, and replete with the sort of puzzles only the best crime fiction creates, Burke's latest novel is an unforgettable roller coaster of passion, surprise, and regret.