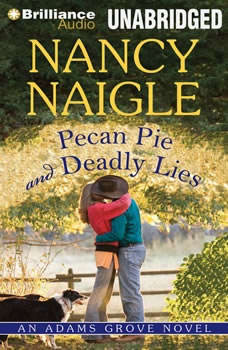 Pecan Pie and Deadly Lies is a sweet, down-home story of love overcoming all obstacles — from the crossroads of small town and suspense. America’s beloved country superstar Cody Tuggle never expected to be one of America’s most wanted. At least that’s how he feels since he’s been accused of murdering his scheming agent. Desperate to prove he’s innocent, he turns to his only alibi, award-winning photographer Kasey Phillips, who recently toured with him and his band. After an exciting life on the road, Kasey has settled down in small-town Adams Grove with her five-year-old son. Unexpectedly reunited with Cody, she finds herself open to love again. But just when she’s ready to fall, everything she ever believed about him is called in to question, and she’s faced with more than just being his alibi. Cody has waited a long time for genuine love, and he can’t let this chance with Kasey slip away. But as the evidence stacks up, the accusations against him put a damper on the sparks flying between them. Can he convince Kasey he’s innocent, and will she clear his name in time? Or will their dreams of the future be the victim of a deadly lie?

Out of Focus
An Adams Grove Novel #2