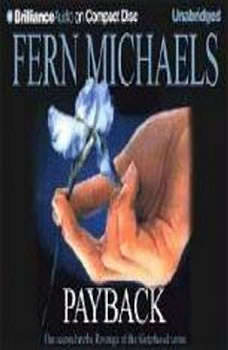 Meet the Sisterhood - seven very different women who found one another in their darkest days and formed an indelible friendship, strong enough to heal their pasts and bring laughter and joy back into their lives. In Myra Rutledge’s beautiful Virginia home, amid hugs and fresh iced tea, shrimp fritters and shell-pink tulips, the friends have gathered to embark on their second mission of sweet revenge for one of their own. Julia Webster’s husband, a U.S. Senator, has used his wife’s graciousness and elegance to advance his career even as he’s abused her trust at every turn and left her dreams for the future in tatters. Now, on the eve of his greatest political victory, he’s about to learn a serious lesson in payback. Because the senator crossed the wrong woman…and there are six more where she came from… “Revenge is a dish best served with cloth napkins and floral centerpieces…fast-paced…puts poetic justice first.” - Publishers Weekly

Having read the first book in the series, I knew before I started this sequel that the work would be poorly researched and completely implausible. Yet, I find myself drawn to this series again and again just to see how far Ms. Michaels is willing to stretch the boundaries of common sense. In that aspect, Payback does not disappoint. Again the ladies come together to avenge one of the Sisterhood who has been wronged by the Justice System. But in a stroke of impeccable timing, the chosen lady decides she's not ready to seek vengeance and wonder of wonders! Julia's name is drawn out of the box just days before her philandering, AIDS infected Senator husband will be named as a potential Vice Presidential candidate. Some of my favorite moments of idiocy: a former MI-6 agent who's been in hiding in America since his cover was blown years ago has his photo posted on his employer's website a doctor with AIDS who hasn't bothered until now to inform her husband of his condition, thereby infecting God-knows-how-many other unsuspecting women the Senator's unexplained and totally forgotten disappearance on the tail end of his VP announcement the savvy FBI agent who, when provided with a phone number by a stranger, dials, hears a receptionist answer with Oval Office, and quickly hangs up--convinced the phone number is legit and of course, the HMO family's hypnosis that has them permanently believing they're happy slaves in Africa. If you're able to totally suspend logic while reading, you might find the story entertaining. Otherwise, you'll probably want to pass.