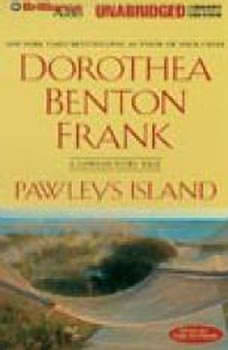 Of the many barrier islands that pepper the coast of South Carolina’s Lowcountry, Pawleys Island, the “arrogantly shabby” family playground for generations, might be the most mysterious and charming of them all. It is here and in the surrounding area that Dorothea Benton Frank has placed her latest Lowcountry tale, Pawleys Island. Meet Huey Valentine, the owner of Gallery Valentine, catering to interior decorators and, heaven save us, tourists. Huey resides on his family plantation on the shores of the Waccamaw River, where he cares for his mother, Miss Olivia, a wise and irresistible octogenarian. And meet Huey’s great friend Abigail Thurmond, retired attorney from Columbia, who has laid claim to her family’s home on Pawleys Island. Huey and Abigail are complacent in their fat and sassy lives until the stormy advent of the artist Rebecca Simms. Rebecca has been catapulted from her home, her marriage, and her children. She has escaped to Pawleys Island to hide herself from herself. But after Miss Olivia pries Rebecca’s secrets from her, Huey and especially Abigail are challenged to reenter life outside the dream state their idyllic geography evokes. They will see that Rebecca has her day in court, but they never expect to provoke a national forum for discussion. With characteristic humor and a full cast of eccentric and wonderfully lovable characters, Dorothea Benton Frank brings us her most honest and entertaining story to date. People have secrets they never want anyone to know. People have pasts they would prefer be left out of conversation. In Frank’s nimble hands, it all comes spilling out to be examined and reconciled.

Meet Linda Breland, single parent of two teenage daughters. The oldest, Lindsey, who always held her younger sister in check, is leaving for college. And Gracie, her Tasmanian devil, is giving her nightmares. Linda's personal life? Well, between the...

This book is badly-written, but perhaps if it were read by a skilled artist it would be tolerable. However, read by the author, it is virtually unbearable. It was what I had with me on a two-day drive, and I abandoned it as soon as I returned home to find a new selection in my mailbox. I have no idea how this author is published. I would give this a -star, were I allowed to do so.