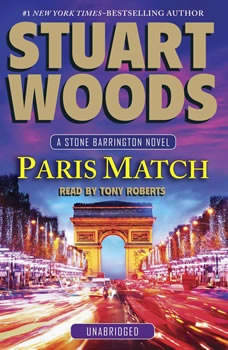 Stone Barrington is back and better than ever in the astonishing new thriller from New York Times bestseller Stuart Woods.

Stone Barrington has returned to Paris to attend to some business concerns, and finds himself embroiled in high-stakes trouble on both sides of the pond. An old enemy is still in hot pursuit, and this time he might have a powerful local resource on his side: a gentleman with his own ax to grind against Stone. And back in the United States, the swirling rumor mill threatens to derail a project of vital importance not just to Stone but to the nation. Though Stone is no stranger to peril, never before has he faced threats from so many directions at once. . . .