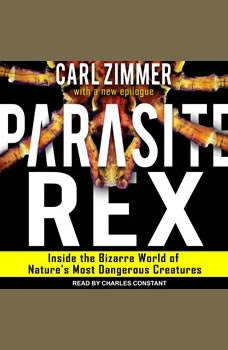 Parasite Rex: Inside the Bizarre World of Nature's Most Dangerous Creatures

For centuries, parasites have lived in nightmares, horror stories, and the darkest shadows of science. In Parasite Rex, Carl Zimmer takes listeners on a fantastic voyage into the secret universe of these extraordinary life-forms—which are not only among the most highly evolved on Earth, but make up the majority of life's diversity. Traveling from the steamy jungles of Costa Rica to the parasite-riddled war zone of southern Sudan, Zimmer introduces an array of amazing creatures that invade their hosts, prey on them from within, and control their behavior. He also vividly describes parasites that can change DNA, rewire the brain, make men more distrustful and women more outgoing, and turn hosts into the living dead. This comprehensive, gracefully written book brings parasites out into the open and uncovers what they can teach us all about the most fundamental survival tactics in the universe—the laws of Parasite Rex.