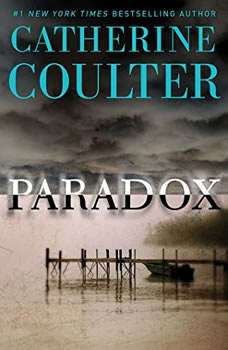 With unparalleled suspense and her trademark explosive twists, #1 New York Times bestselling author Catherine Coulter delves into the terrifying mind of an escaped mental patient obsessed with revenge in this next installment of her riveting FBI series. When he fails to kidnap five-year-old Sean Savich, agents Sherlock and Savich know they’re in his crosshairs and must find him before he continues with his ‘kill’ list.Chief Ty Christie of Willicott, Maryland, witnesses a murder at dawn from the deck of her cottage on Lake Massey. When dragging the lake, not only do the divers find the murder victim, they also discover dozens of bones. Even more shocking is the identification of a unique belt buckle found among the bones. Working together with Chief Christie, Savich and Sherlock soon discover a frightening connection between the bones and the escaped psychopath.Paradox is a chilling mix of Dr. Jekyll and Mr. Hyde, old secrets that refuse to stay buried, and ruthless greed that keep Savich and Sherlock and Chief Ty Christie working at high speed to uncover the truth before their own bones end up at the bottom on the lake.Don’t miss Paradox, the twenty-second FBI thriller.

Lieutenant Eve Dallas walks the thin line between love and hate in this fabulous 40th thriller from #1 New York Times bestseller J. D. Robb.…Eve Dallas has solved a lot of high-profile murders for the NYPSD and gotten a lot of media. She—...

Dear Listener: Impulse is an exciting mystery suspense that first came out in 1990. I’ve done a bit of rewriting and updated it. Now, I want you to get ready. Rafaella Holland, a Pulitzer Prize winner, now a journalist for the Boston Tribune...

FBI Special Agent Jackson Crowne is flying renowned psychiatrist Dr. Timothy MacLean back to Washington, D.C., to protect him and discover who’s trying to kill him. But they don’t make it. That same morning, agents Savich and Sherlock ar...

The number-one New York Times bestselling author is back with an electrifying new entry in the FBI series featuring Dillon Savich and Lacey Sherlock.FBI Special Agent Griffin Hammersmith, last seen in Backfire, has been recruited by Dillon Savich to...