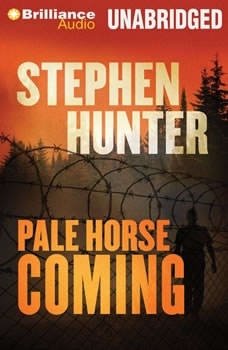 It’s 1951. The Thebes State Penal Farm in Mississippi is up a dark river, surrounded by swamps and impenetrable piney woods. It’s the Old South at its most brutal—a place of violence, racial terror, and even more horrific rumors. Of the few who make the journey, black or white, even fewer return.But in that year, two men will come to Thebes. The first is Sam Vincent, the former prosecuting attorney of Polk County, Arkansas who, with great misgivings, accepts a job to investigate a disappearance. Before he leaves on this dangerous trip, he confesses his fears to his former investigator Earl Swagger, now a sergeant of the Arkansas State Police. Earl pledges that if Sam is not back by a certain time, he will come looking for him.What they encounter there is something beyond their wildest imagining of evil. The dying black town is ruled by white deputies on horseback who are more like an occupying army and the only escape is over the wild currents of the dark river that drowns as many people as it liberates. But nothing in town compares to the prison. Run by an aging madman with insane theories of racial purity, it is administered by a brutal sergeant known as Bigboy. The convicts call him The Whip Man—he can take a man’s soul with his nine feet of braided catgut.Both Sam and Earl will be challenged to the limits of their strength by this place and will struggle not only for their own survival, but with the question: What does a man do when confronted with evil?