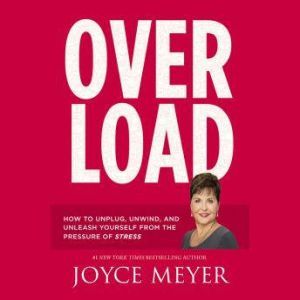 Overload: How to Unplug, Unwind, and Unleash Yourself from the Pressure of Stress

#1 New York Times bestselling author Joyce Meyer shows readers how to become free from the burden of stress so that they can achieve God's best for their lives. As technology increases your accessibility, it becomes harder to mute the background noise of your life and receive God's guidance. Joyce Meyer calls this OVERLOAD, when the demands of your busy life become all-consuming and overwhelming. But to experience the joyful life God has planned, you must make time to focus on His Word. Then you'll receive His healing calmness and gain the strength to take on life's challenges, from physical ailments to problems in relationships. Through the practical advice and Scriptural wisdom in this book, you'll learn how to unplug and free yourself from burdens that weigh you down. You'll gain simple, effective tips for better rest and stress management and discover the fulfilling life you were meant to lead.