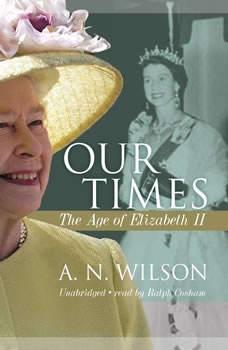 Our Times: The Age of Elizabeth II

When Queen Elizabeth II was crowned in 1953, few could have any inkling of the stupendous changes that were going to take place in Britain and around the world. In this third book of his acclaimed histories, A. N. Wilson paints a panoramic portrait of the development of modern Britain. He begins in the 1950s with the Suez crisis, immigration, the Angry Young Men and Harold Macmillan, and takes us through the vast cultural changes and pop fashions of the 1960s. He continues through the 1970s, with Vietnam and the Cold War looming large and the Labour government that ushered in the Winter of Discontent. The collapse of the Soviet Union in the ’80s signaled the end of a political era in Britain, leading up to the current period of unprecedented peace and prosperity.