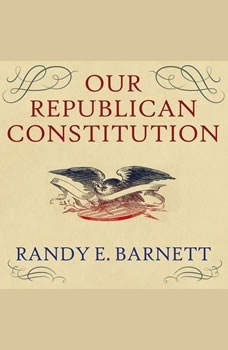 Our Republican Constitution: Securing the Liberty and Sovereignty of We the People

The Constitution of the United States begins with the words: "We the People." But from the earliest days of the American republic, there have been two competing notions of "the People," which lead to two very different visions of the Constitution. Those who view "We the People" collectively think popular sovereignty resides in the people as a group, which leads them to favor a "democratic" constitution that allows the "will of the people" to be expressed by majority rule. In contrast, those who think popular sovereignty resides in the people as individuals contend that a "republican" constitution is needed to secure the pre-existing inalienable rights of "We the People," each and every one, against abuses by the majority. In Our Republican Constitution, renowned legal scholar Randy E. Barnett tells the fascinating story of how this debate arose shortly after the Revolution, leading to the adoption of a new and innovative "republican" constitution; and how the struggle over slavery led to its completion by a newly formed Republican Party.