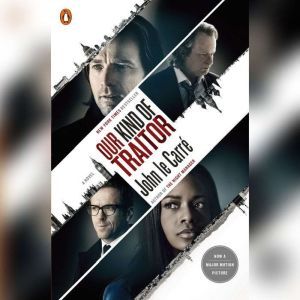 Our Kind of Traitor

In this exquisitely told novel, John le Carré shows us once again his acute understanding of the world we live in and where power really lies.

In the wake of the collapse of Lehman Brothers and with Britain on the brink of economic ruin, a young English couple takes a vacation in Antigua. There they meet Dima, a Russian who styles himself the world’s Number One money-launderer and who wants, among other things, a game of tennis. Back in London, the couple is subjected to an interrogation by the British Secret service who also need their help. Their acquiescence will lead them on a precarious journey through Paris to a safe house in Switzerland, helpless pawns in a game of nations that reveals the unholy alliances between the Russian mafia, the City of London, the government and the competing factions of the British Secret Service.

This novel probably deserves more than 3 stars and Robin Sachs does a pitch perfect job of reading, with each character possessing a distinctive voice that reflects their personality to a T. But I am just so tired of LeCarres sad depressing endings where everyone you are rooting for loses and where several major story lines are left totally unresolved. I know, life is unresolved, but so what? This is a story, it has a plot, it introduces complex characters who all rush towards a tense climax, but then... nothing. Id be happy to send Mr. LeCarre some Prozac if he would just write a story where most of the good guys come out ahead and all the main story lines are resolved at least regarding the plots climax.