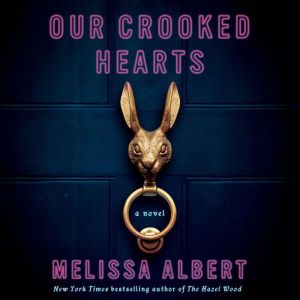 Our Crooked Hearts: A Novel

"Every line reads like an incantation, and the result is a book pulsing with magic, one that holds the reader firmly under its spell.” —V.E. Schwab, author of The Invisible Life of Addie LaRue

“A riveting story that grips you like a spell until you’re too deep to emerge unscathed.” —Angeline Boulley, author of Firekeeper’s Daughter

The suburbs, right now . . .
Seventeen-year-old Ivy’s summer break kicks off with an accident, a punishment, and a mystery: a stranger whose appearance in the middle of the road, in the middle of the night, heralds a string of increasingly unsettling events. As the days pass, Ivy grapples with eerie offerings, corroded memories, and a secret she’s always known—that there's more to her mother than meets the eye.

The city, back then . . .
Dana has always been perceptive. And the summer she turns sixteen, with the help of her best friend and an ambitious older girl, her gifts bloom into a heady fling with the supernatural. As the trio’s aspirations darken, they find themselves speeding toward a violent breaking point.

Years after it began, Ivy and Dana's shared story will come down to a reckoning among a daughter, a mother, and the dark forces they never should’ve messed with.