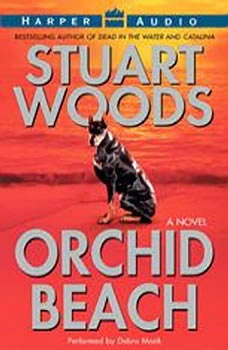 Smart, attractive, and fiercely independent, Major Holly Barker, the army brat daughter of a master sergeant, has been forced into early retirement at the age of thirty-seven as the result of a scandalous sexual harassment case. With the help of her dad, she makes the move to civilian life, becoming deputy chief of police in Orchid Beach, Florida.But below the calm, sunny surface of this sleepy, well-to-do coastal island town lies a web of evil and deceit that escalates when a colleague and another associate are brutally gunned down. Alone, an outsider with no clues to go on, finding the killers won't be easy for Holly, and her seemingly low-key new career soon thrusts her into a dangerous game of cat and mouse. Surrounded by a staff of officers she neither knows nor trusts, Holly finds help in a most unexpected source -- Daisy, a Doberman of exceptional intelligence and loyalty who quickly becomes her inseparable companion and protector. The closer she gets to unraveling the mystery of Orchid Beach, however, the nearer Holly comes to a danger darker and more deadly than any she could have ever anticipated.