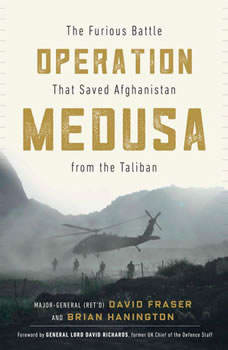 Operation Medusa: The Furious Battle That Saved Afghanistan from the Taliban

From the Canadian in charge of the joint military command in Kandahar Province in Afghanistan, this is the real on-the-ground story of one of NATO's bloodiest, most decisive and misunderstood operations: The battle of Panjwayi, the defining moment of "Operation Medusa."

In the summer of 2006, David Fraser was the Canadian general in charge of NATO's Regional Command South, a territory spanning six Afghan provinces surrounding the Arghandab Valley. Birthplace of the Taliban decades earlier, this fertile region had since become Afghanistan's most deadly turf. It would soon turn deadlier still. Advised in the night by his intelligence officers that the Taliban had secretly amassed for a full-scale military assault, Fraser knew it would fall to him, his Canadians and their allies to avoid the wholesale slaughter of NATO troops, keep the Taliban from laying siege to Kandahar and restore control of the south of the country to a newly formed, democratic Afghan government.
The odds were solidy against Fraser's forces. The Taliban knew every millimetre of their own terrain. During the months of secret manoeuvres they had stocked every farmhouse, school, grape hut and tunnel with weapons and ammunition. They had drilled Soviet-era landmines into all of the marijuana and poppy fields, and dug IEDs into every roadway. Protected from detection by corrupt officials, their sophisticated warfare schools had successfully readied an army of zealous fighters to attack and fight to the death. And now their top commanders were poised to launch decisive military operations against freshly arrived troops who had never seen combat.
&nbsp;&nbsp;&nbsp;&nbsp; The bloodiest battle in NATO's history was about to begin.