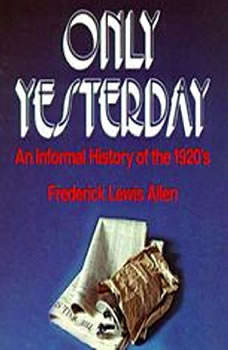 Only Yesterday: An Informal History of the 1920s

Prohibition. Al Capone. The President Harding scandals. The revolution of manners and morals. Black Tuesday. These are only an inkling of the events and figures characterizing the wild, tumultuous era that was the Roaring Twenties. Originally published in 1931, Only Yesterday traces the rise of postWorld War I prosperity up to the Wall Street crash of 1929 against a colorful backdrop of flappers, speakeasies, the first radio, and the scandalous rise of skirt hemlines. Hailed as an instant classic, this is Frederick Lewis Allens vivid and definitive account of one of the twentieth centurys most fascinating decades, chronicling a time of both joy and terrorwhen dizzying highs were quickly succeeded by heartbreaking lows.