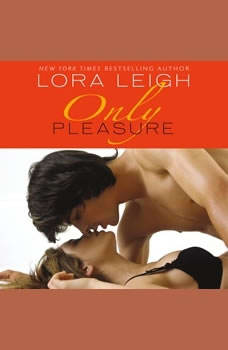 Since Chase Falladay came to her rescue two years ago, Kia Stanton has never been able to forget the powerful man or the kind of life he leads. So two years later when she runs into Chase and his friend, Khalid, and leaves with them that night, she knows exactly where it is all heading. However, little prepares her for what it is like to be in Chase's arms, and in his bed. After years of holding back, Kia is finally able to be the woman she's always dreamed of being in his arms.Kia is a dream Chase has not allowed himself to entertain. Now that he has her, it's her heart he's after and he's determined to win it, no matter the cost. And even though they both agreed that it would only be for pleasure, somewhere along the way it becomes and all-consuming love. Only Pleasure is a sizzling hot, sexy, erotic romance novel from bestselling author Lora Leigh.

Fourth in the New York Times bestselling series known for "blistering sexuality and eroticism." (Romance Reviews Today) Since he saw Janey Mackay taking a dip in her bikini, Major Alex Jansen has had to quell the fire she ignites in him. Even touchi...

In her deliciously steamy novellas, Lori Foster introduced the sinfully attractive-and sensual-Winston brothers. Now she continues their story-as sexy Zane Winston sets his roving eyes on the lady of his dreams. Zane Winston is used to fielding wome...