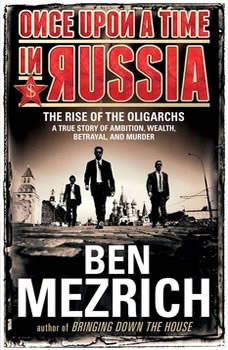 Once Upon a Time in Russia: The Rise of the Oligarchs and the Greatest Wealth in History

The bestselling author of Bringing Down the House (sixty-three weeks on the New York Times bestseller list and the basis for the hit movie 21) and The Accidental Billionaires (the basis for the Academy Award–winning film The Social Network) delivers an epic drama of wealth, rivalry, and betrayal among mega-wealthy Russian oligarchs—and its international repercussions.Once Upon a Time in Russia is the untold true story of the larger-than-life billionaire oligarchs who surfed the waves of privatization to reap riches after the fall of the Soviet regime: “Godfather of the Kremlin” Boris Berezovsky, a former mathematician whose first entrepreneurial venture was running an automobile reselling business, and Roman Abramovich, his dashing young protégé who built a multi-billion-dollar empire of oil and aluminum. Locked in a complex, uniquely Russian partnership, Berezovsky and Abramovich battled their way through the “Wild East” of Russia with Berezovsky acting as the younger man’s krysha—literally, his roof, his protector.Written with the heart-stopping pacing of a thriller—but even more compelling because it is true—this story of amassing obscene wealth and power depicts a rarefied world seldom seen up close. Under Berezovsky’s krysha, Abramovich built one of Russia’s largest oil companies from the ground up and in exchange made cash deliveries—including 491 million dollars in just one year. But their relationship frayed when Berezovsky attacked President Vladimir Putin in the media—and had to flee to the UK. Abramovich continued to prosper. Dead bodies trailed Berezovsky’s footsteps, and threats followed him to London, where an associate of his died painfully and famously of Polonium poisoning. Then Berezovsky himself was later found dead, declared a suicide.Exclusively sourced, capturing a momentous period in recent world history, Once Upon a Time in Russia is at once personal and political, offering an unprecedented look into the wealth, corruption, and power behind what Graydon Carter called “the story of our age.”