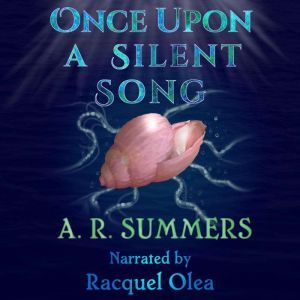 Once upon a Silent Song: A Little Mermaid Retelling

Series: Once upon a Story

Fins to feet, a silenced voice, and a villain that must be stopped... How much do you really know about The Little Mermaid fairytale?

As a Siren with a strong Voice, Nimue has always looked forward to joining the Protectors and using her Voice to help others. But not all is as it seems in the Siryian Sea. Her father, Varun, hates the humans and will stop at nothing to see them destroyed. When he orders Nimue to help the other Protectors sink any ship that crosses their borders, Nimue puts all her strength into saving a ship and the humans on it, despite the odds against her.

For her defiance, Nimue’s Voice is taken from her. And now, she has only two options of getting her Voice back—finding True Love’s Kiss or convincing her mother to reclaim the throne. Not one to believe in true love, Nimue puts her hope in her mother. But before she makes it very far, she is captured by humans sailing in the opposite direction of where she needs to go. Forced to stay with them until they make it to land, Nimue must rely on her outcast sister to find their mother and set things right. Unwilling to give in to her frustrations, she finds herself interacting with the humans and feeling drawn to the ship’s handsome young captain.

Although True Love’s Kiss starts to look like a valid option as the mutual attraction between Brandt and Nimue grows, the strange cultural customs of these islanders clash with her own in a way that may make it impossible.

Can Nimue convince Brandt to kiss her and free her Voice? And if she succeeds, will she be willing to pay the price?

The Once upon a Story series consists of interconnected standalones that can be read in any order.