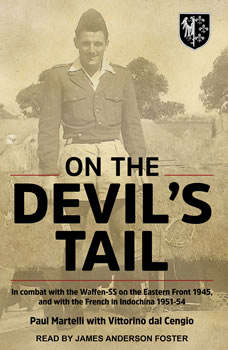 On the Devil's Tail: In Combat with the Waffen-SS on the Eastern Front 1945, and with the French in Indochina 1951-54

This is the riveting true story of Paul Martelli, a fifteen-year-old German-Italian, who fought in Pomerania, on the Eastern Front, in 1945 as a member of the 33. Waffen-Grenadier-Division der SS "Charlemagne" and, later, as a soldier with French forces during three years (1951-1954) in the Tonkin area, Vietnam. Paul recounts his time at the Sennheim military training base, where he was introduced to the rigorous discipline of body and mind: he then goes back to 1940, during the German invasion of France, when he was still a boy in Lorraine, hinting at his motivations for enlisting with the Waffen SS. He reveals his and many young soldiers' exciting and often humorous escapades at Greifenberg, his first love with a German girl helping refugees, his experiences and feelings during the combats at Korlin, during the strenuous defense of Kolberg, while regrouping at Neustrelitz and at the German defeat. With a companion he ends up at a castle delivering a group of women camp prisoners to a Russian officer, living in disguise among enemy soldiers until he escapes and surrender to the Americans. After his sentence, imprisonment, evasions and military service in Morocco, Paul is sent to fight in defense of bases north of Hanoi, Vietnam. He survives three years of fierce combats, assaults, ambushes, night patrols, fatal traps and mortal risks but, deep down, he compares his service with the Waffen SS during the last year of war with the inefficiency of the French Expeditionary Force in the Far East and comes out deeply frustrated. At almost 26, he has fought and lost in two wars, both against the communists, be they Soviet or Viet-Minh. Unemployed, and with the ideals of a 'Nouvelle Europe' in pieces, he briefly joins the French Foreign Legion, his last hope, but in the end choses another path. This is a unique memoir, packed with incident and recounting the story of one individual caught up in a series of life-changing events.