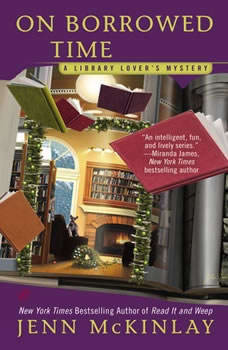 Loving a good cup of coffee runs in the family for Briar Creek library director Lindsey Norris. But when her brother, Jack, a consultant for a coffee company, goes missing, her favorite beverage becomes a key clue in a dangerous mystery.

Between preparing the library for the holidays and juggling the affections of ex-boyfriend, Captain Mike Sullivan, and her new crush, actor Robbie Vine, Lindsey has her hands full. But the mysterious disappearance of her world-traveling playboy brother takes precedence over all.

Afraid that involving the police could brew trouble for Jack, Lindsey takes matters into her own hands. But as her quest for her brother embroils her in a strange case involving South American business dealings and an enigmatic and exotic woman, it’ll take the help of both her library book club—the crafternooners—and her eager-to-please suitors to keep Jack from ending up in hot water…

Murder on the Half Shelf
by Lorna Barrett

The town of Stoneham is a haven for bookstores, but it is sadly lacking in bed-and-breakfasts. Fortunately Pippa and Jon Comfort's Sheer Comfort Inn is about to open, and the couple has offered some locals a free night as a trial run. But it won't...

Best-selling author Joanne Fluke’s Hannah Swensen mysteries have earned her a loyal following. in this 16th delightful installment, the tour bus carrying the Cinnamon Roll Six overturns, sending the band members to the hospital—and the k...

A Fool and His Honey
by Charlaine Harris

Family secrets step to the forefront in this dazzling mystery from NYT best-selling author Charlaine Harris. When her husband’s niece shows up unexpectedly, drops off a baby, and disappears, Aurora is overwhelmed. And then the niece’s hu...

The Diva Takes The Cake
by Krista Davis

Sophie Winston's sister, Hannah, is getting married-again! And if you ask Sophie, her future brother-in-law is no prince. But is he a killer? That's the question on everyone's mind when his ex-wife is found hanging from a pergola. This is one event ...

Books Can Be Deceiving
A Library Lover's Mystery

Due or Die
A Library Lover's Mystery