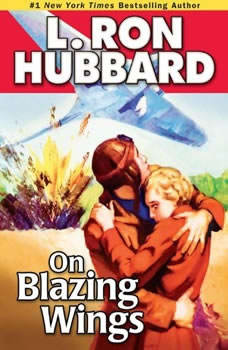 Embittered by past failures and broken dreams, American fighter pilot David Duane believes in but one cause?his own. Europe is at war, and he?ll fight it for a price, selling his deadly flying skills to the highest bidder. Just as Bogart came to Casablanca to escape his past, Duane has come to the icy white wastes of Scandinavia to wage a private war in the skies. But he?s about to take off on a flight and undertake an unforgettable journey?On Blazing Wings?to a place beyond the imagination . . . leading to a revelation that will open his eyes and his heart. In a world divided by war, Duane discovers that sometimes you have to make a choice, and that making the wrong one could cost him the woman he loves. . . . Soar to new heights of adventure as the audio version of On Blazing Wings puts you on the front line of a battle between love and death. As a barnstorming pilot in the early days of aviation, Hubbard was dubbed ?Flash? Hubbard by the aviation magazines of the day. His unique personal and pioneering knowledge of flight streaks across the page in novels like On Blazing Wings. Cast: Bob Caso, Christina Huntington, John Mariano, Phil Proctor and Kelly Ward

On Blazing Wings
Stories from the Golden Age