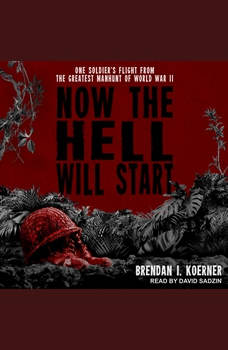 Now the Hell Will Start

An epic saga of hubris, cruelty, and redemption, Now the Hell Will Start tells the remarkable tale of the greatest manhunt of World War II. Herman Perry, besieged by the hardships of the Indo-Burmese jungle and the racism meted out by his white commanding officers, found solace in opium and marijuana. But on one fateful day, Perry shot his unarmed white lieutenant in the throes of an emotional collapse and fled into the jungle. Brendan I. Koerner spent nearly five years chasing Perry's ghost to the most remote corners of India and Burma. Along the way, he uncovered the forgotten story of the Ledo Road's GIs, for whom Jim Crow was as powerful an enemy as the Japanese-and for whom Herman Perry, dubbed the jungle king, became an unlikely folk hero.