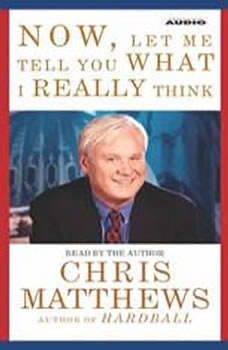 Now, Let Me Tell You What I Really Think

Chris Matthews has been playing "Hardball" since the day he was born. As host of Hardball and the best-selling author of such classics as Hardball and Kennedy & Nixon, Matthews is a political cop who insists on the truth and nothing but. In Now Let Me Tell You What I Really Think, Chris Matthews is at his brilliant, blunt, bulldogged best. From the Cold War to the Clinton on Years, Matthews the straight-up account of what it means to be an American. Matthews tells us about his "God and Country" Catholic school education in Philadelphia complete with cold war air-raid drills and his arly enthusiasm for politics. He also shares with us his various adventures: ears in Africa with the Peace Corps, the challenge of running for congress at a mere 28 years old, and lastly his three decades deep in the "belly of the beast" of American politics. Matthews has made his name as a razor-sharp journalist determined to expose the politicians who abuse their power. With Now, Let Me Tell You What I Think, Matthews rallies those who "work hard and play by the rules" and why he still heralds the wisdom he learned from a capitol policeman over twenty years ago, "The little man loves his country, because it's all he's got." A hard-to-categorize maverick with an uncool love for his country, Matthews gives irreverent look at where we are, and how we got here.