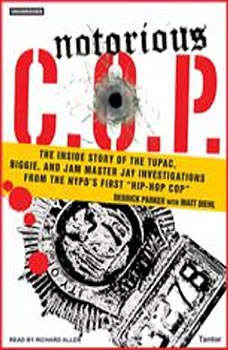 Notorious C.O.P.: The Inside Story of the Tupac, Biggie, and Jam Master Jay Investigations from NYPD's First "Hip-Hop Cop"

The stories are as infamous as the artists who tell them. With their boasts of drugs, extortion and even murder, in today's world rappers need rap sheets before they can even hope to have a platinum record. So with all this grandstanding about their criminal nature, why haven't more hip-hop artists been busted for the crimes that they brag of, and why haven't high profile crimes replete with witnesses and media coverage ever been solved? Derrick Parker knows why. A veteran of the NYPD, Parker served as the lead detective in the -Rap Intelligence Unit, the first special force devoted to hip-hop crime. For over twenty years he served on the force, covering the hip-hop beat and uncovering the truth behind some of music's most notorious crimes. But in the midst of politics and internal strife, Parker's efforts to close the cases were stymied by the NYPD. Notorious C.O.P. will be the Serpico of the new millennium, exposing the flaws in the NYPD that have rendered them unable to adequately deal with the threat of hip-hop crime. From cops working part-time for the artists they are supposed to be pursuing, to their lack of understanding of gang culture and drug warfare, which has left not only these widely publicized murders unsolved, but has allowed notorious gang leaders to go unprosecuted for decades. Filled with photos, documents, interviews, and anecdotes, Notorious C.O.P. will be the most extensive and authoritative book ever written on hip-hop crime, exposing the facts behind the legends and the foibles of the NYPD that have left them unresolved to this day.