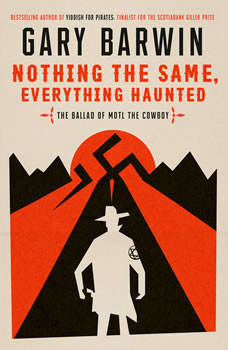 Nothing the Same, Everything Haunted

A middle-aged Jewish man who fantasizes about being a cowboy goes on an eccentric quest across Europe after the 1941 Nazi invasion of Lithuania in this wild and witty yet heartrending novel from the bestselling author of Yiddish for Pirates, shortlisted for the Scotiabank Giller Prize.

Motl is middle-aged, poor, nerdy, Jewish and in desperate need of a shave. Since having his balls shot cleanly off as a youth in WWI, he's lived a quiet life at home in Vilnius with his shrewd and shrewish mom, Gitl, losing himself in the masculine fantasy world of cowboy novels by writers like Karl May--novels equally loved by Hitler, whose troops have just invaded Lithuania and are out to exterminate people like Motl. In his dreams, Motl is a fast-talking, rugged, expert gunslinger capable of dealing with the Nazi threat. But only in his dreams.

As friends and neighbours are killed around them, Motl and Gitl escape from Vilnius, saving their own skins. But they immediately risk everything to try rescue relatives they hope are still alive. With death all around him, Motl decides that a Jew's best revenge is not only to live, but to procreate. In order to achieve this, though, he must relocate those most crucial pieces of his anatomy lost to him in a glacier in the Swiss Alps in the previous war. It's an absurd yet life-affirming mission, made even more urgent when he's separated from his mother, and isn't sure whether she's alive or dead. Joining forces, and eventually hearts, with Esther, a Jewish woman whose family has been killed, Motl ventures across Europe, a kaleidoscope of narrow escapes and close encounters with everyone from Himmler, to circus performers, double agents, quislings, fake "Indians" and real ones. Motl at last figures out that he has more connection to the Indigenous characters in western novels than the cowboys.

An imaginative and deeply felt exploration of genocide, persecution, colonialism and masculinity--saturated in Gary Barwin's sharp wit and perfect pun-play--Nothing the Same, Everything Haunted: The Ballad of Motl the Cowboy is a one-of-a-kind novel of sheer genius.