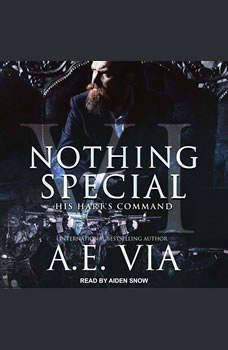 Nothing Special VI: His Hart’s Command

Lennox Freeman (Free) is one of the best hackers in the world which has caused him to spend most of his life on the run. Never able to put down roots, he couldn't trust anyone not to take advantage of him, even his own family. Ivan Hart has lived and bled one creed all of his life: To Serve and Protect. His intense focus and determination in law enforcement has led him to finally commanding his own team. He'd worked hard to put together a squad of badasses capable of backing up a very dangerous team of detectives. Being God and Day's last line of defense came with a lot of responsibility that he took very seriously. After his divorce was final Hart turned right around and remarried his job. He had his good friends there in the office with him every day, so it was easier to ignore the few quiet hours he spent at home alone each night. He'd settled well into his new routine and was comfortable with it. Then God decided to disrupt everything by hiring another tech specialist for his department. A man whose brains, trendy looks, and voice would leave Hart tongue-tied and captivated at their first introduction. Contains mature themes.