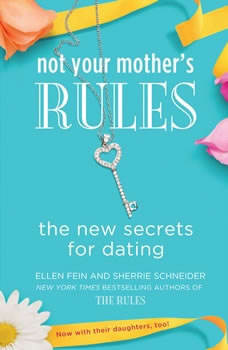 Not Your Mother's Rules: The New Secrets for Dating

How long should I wait to respond to his text message? Can I friend him on Facebook? Why did he ask for my number but never call me?When The Rules was published in 1995, its message was straightforward: be mysterious. But for women looking for love today, it's not quite so simple. In a world of instant messaging, location check-ins, and status updates, where hook-ups have become the norm and formal one-on-one dates seem a thing of the past, it's difficult to retain the air of mystery that keeps men interested. Now, with help from their daughters, the original Rules Girls Ellen Fein and Sherrie Schneider share their thoroughly modern, fresh take on dating that will help women in today's information age create the happy love lives they want and deserve. Whether you're a 20-something dating for the first time, a 30-something tired of being single, a 40-something giving advice to your daughter, or a 50-something getting back in the dating game, this book has the answers you've been waiting for. The Rules include: Make Yourself Invisible and Other Ways to Get Out of Instant Messaging Text-Back Times Chart TTYL: Always End Everything First-- Get Out of There!

Bethenny Frankel, four-time New York Times bestselling author, self-made businesswoman, and media maven, offers her hard-won guidance on dating and relationships in the tradition of her breakout book, A Place of Yes.Bethenny is good at many things&#...