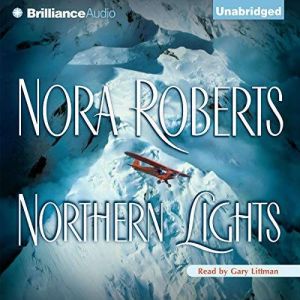 Lunacy was Nate Burke’s last chance. As a Baltimore cop, he’d watched his partner die on the street – and the guilt still haunts him. With nowhere else to go, he accepts the job as Chief of Police in this tiny, remote Alaskan town. Aside from sorting out a run-in between a couple of motor vehicles and a moose, he finds his first few weeks on the job are relatively quiet. But just as he wonders whether this has been all a big mistake, an unexpected kiss on New Year’s Eve under the brilliant Northern Lights of the Alaska sky lifts his spirit and convinces him to stay just a little longer. Meg Galloway, born and raised in Lunacy, is used to being alone. She was a young girl when her father disappeared, and she has learned to be independent, flying her small plane, living on the outskirts of town with just her huskies for company. After her New Year’s kiss with the Chief of Police, she allows herself to give in to passion – while remaining determined to keep things as simple as possible. But there’s something about Nate’s sad eyes that gets under her skin and warms her frozen heart. And now, things in Lunacy are heating up. Years ago, on one of the majestic mountains shadowing the town, a crime occurred that is unsolved to this day – and Nate suspects that a killer still walks the snowy streets. His investigation will unearth the secrets and suspicions that lurk beneath the placid surface, as well as bring out the big-city survival instincts that made him a cop in the first place. And his discovery will threaten the new life – and the new love – that he has finally found for himself.

Made me want to move to Alaska! Great book - another one you just can't put down!

As a murder mystery, the book is somewhat lacking, as a romance, Nora has once again hit it out of the park. This book is a great read. While she doesn't do a great job at throwing you off the trail of the murderer as you might want, the romance of Nate and Meg is a great one. You root for them to be happy and peaceful. I recommend this book.

I love how Nora writes. I felt like I was in Alaska. Fantastic story and great characters.

My first NR Book and LOVED it!! The Narrator in the audio version was incredible!! NR ability to make you feel like your there seeing what the characters are seeing is incredible. The characters where diverse and the story flowed beautifully. The story had mystery, drama and the romance between Meg & Nate was HOT!! I hope her other books are just as good!!