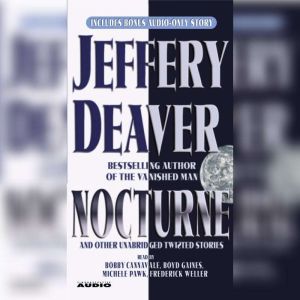 Nocturne: And Other Unabridged Twisted Stories

New York Times bestselling author Jeffery Deaver has long thrilled fans with tales of masterful villains and their nefarious ways, and the brilliant minds who bring them to justice. Now the author of the Lincoln Rhyme series has collected his award-winning, spine-tingling stories of suspense -- stories that will widen your eyes and stretch your imagination. This standout collection from Twisted includes "Gone Fishing" in which, a daughter begs her father not to go fishing in an area where there have been a series of brutal killings; a contemporary of the playwright William Shakespeare vows to avenge his family's ruin in All the World's a Stage; in "The Kneeling Soldier," a father's love turns deadly when he protects his only daughter from a stalker, but was the stalker indeed a stalker?; and in the bonus story Interrogation, a detective grills a cold-blooded murderer as to why he killed a perfect stranger. Diverse, provocative, eerie and inspired, this collection exhibits the amazing range and signature plot twists that have earned Deaver the title "master of ticking-bomb suspense" by People.